This year is all about the couple. Here at Wild Blossoms Studio, we adore Colorado elopements and we are fully embracing non-traditional, intimate wedding ceremonies. As much as we love an all out, elegant wedding with a sizable party, elopements bring something else to the table of closeness between a person and their partner. Most couples today either way crave a wedding day that reflects their relationship as a whole. They want to be able to focus on each other and value a true experience they can remember forever.

If you decide to go the elopement route, you have no limitations really. Your special day can be customized and original in order to suite you and your partner as a whole. Whether you want to have your toes in the ocean waters, hike to the top of a mountain, a picnic meant for 2, waterfalls, or you want to share your first dance together by campfire, it will be an intimate and meaningful experience. 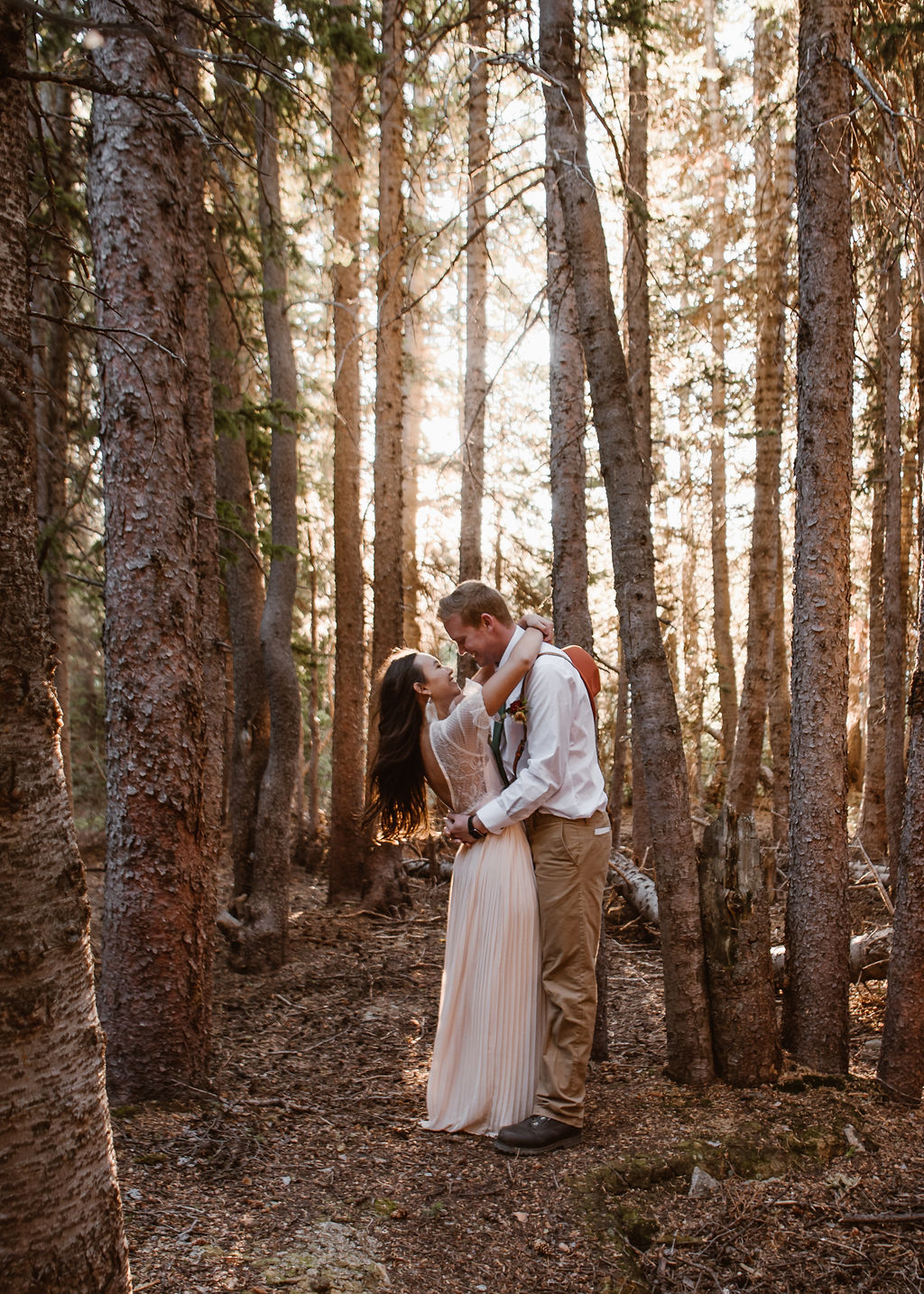 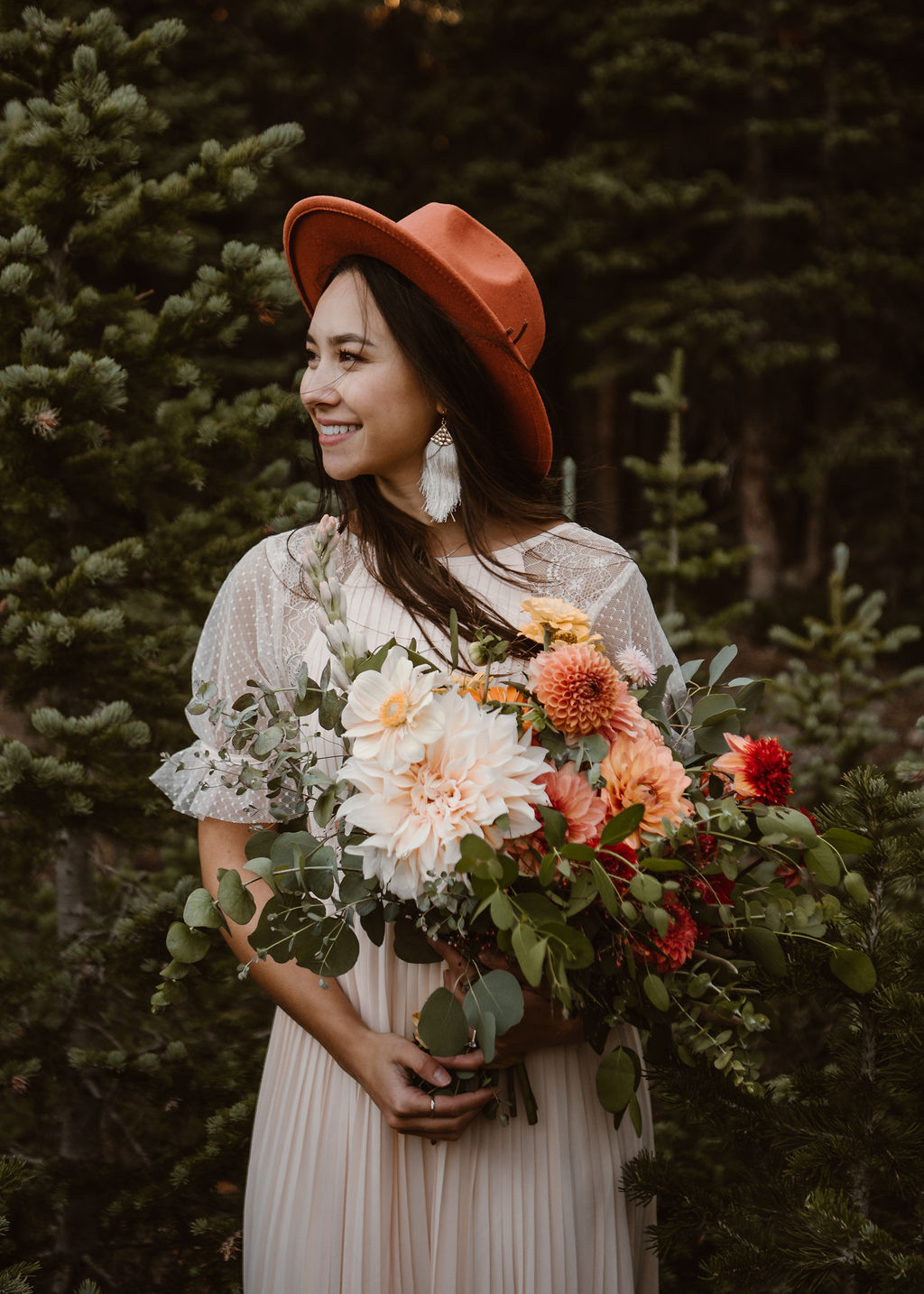 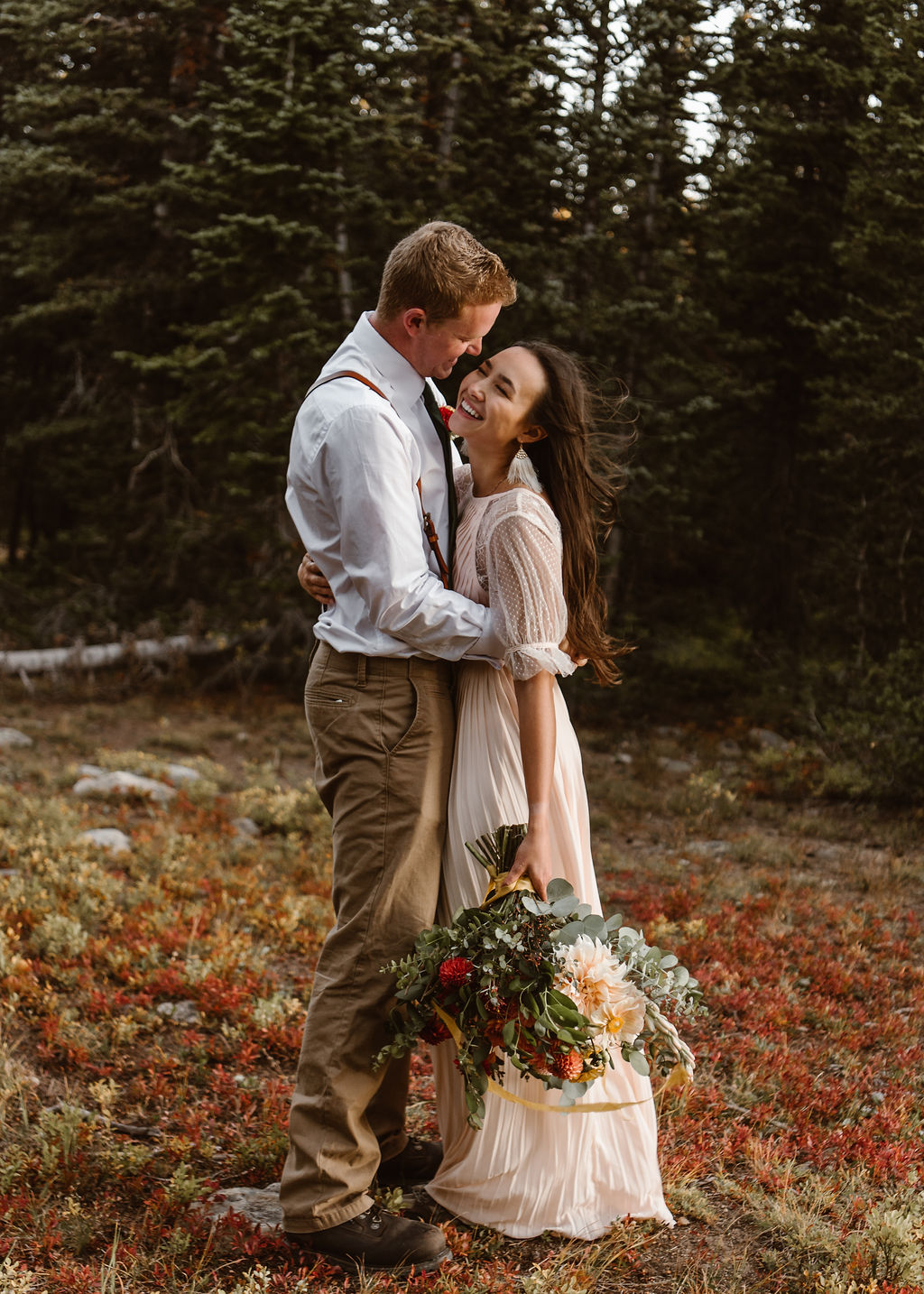 The history of eloping can be traced back to the 13th century when the word meant “to leap”. Over the following centuries the meaning developed and by the 1600’s it described a situation in which a wife runs away from her husband to be with her lover. Many times, these abandoned husbands would place ads in the local newspaper to warn everyone that whatever money she was recklessly spending wasn’t attached to him. Another form of the phrase lead to the husband leaving the wife for a younger woman. Then of course, the phrase “shotgun wedding” was coined which meant a rushed or hurried wedding most likely because the bride was pregnant. Truth be told, the history of eloping’s’ waters can get really murky so we won’t take you down the entire hole of lying, deceit, and overall sexism. These old views are surrounded by money, crime, and somehow shotguns, and many times had nothing to do with actually being in love.

Flash forward to the 30’s, the Great Depression left people to reinvent in many ways including not having the means to have an extravagant wedding. This wasn’t a sinister way of thinking as much as it was simply adaptation to the economy. Eventually, eloping turned into that cliché movement where you run away to Las Vegas and get married in a casino with a few paid witnesses as an overall middle finger to society. Fortunately, times have changed so let’s talk about what modern elopement means. Today, eloping can still be a form of rebellion against inherited marriage traditions and customs, but just less menacing and more chic. 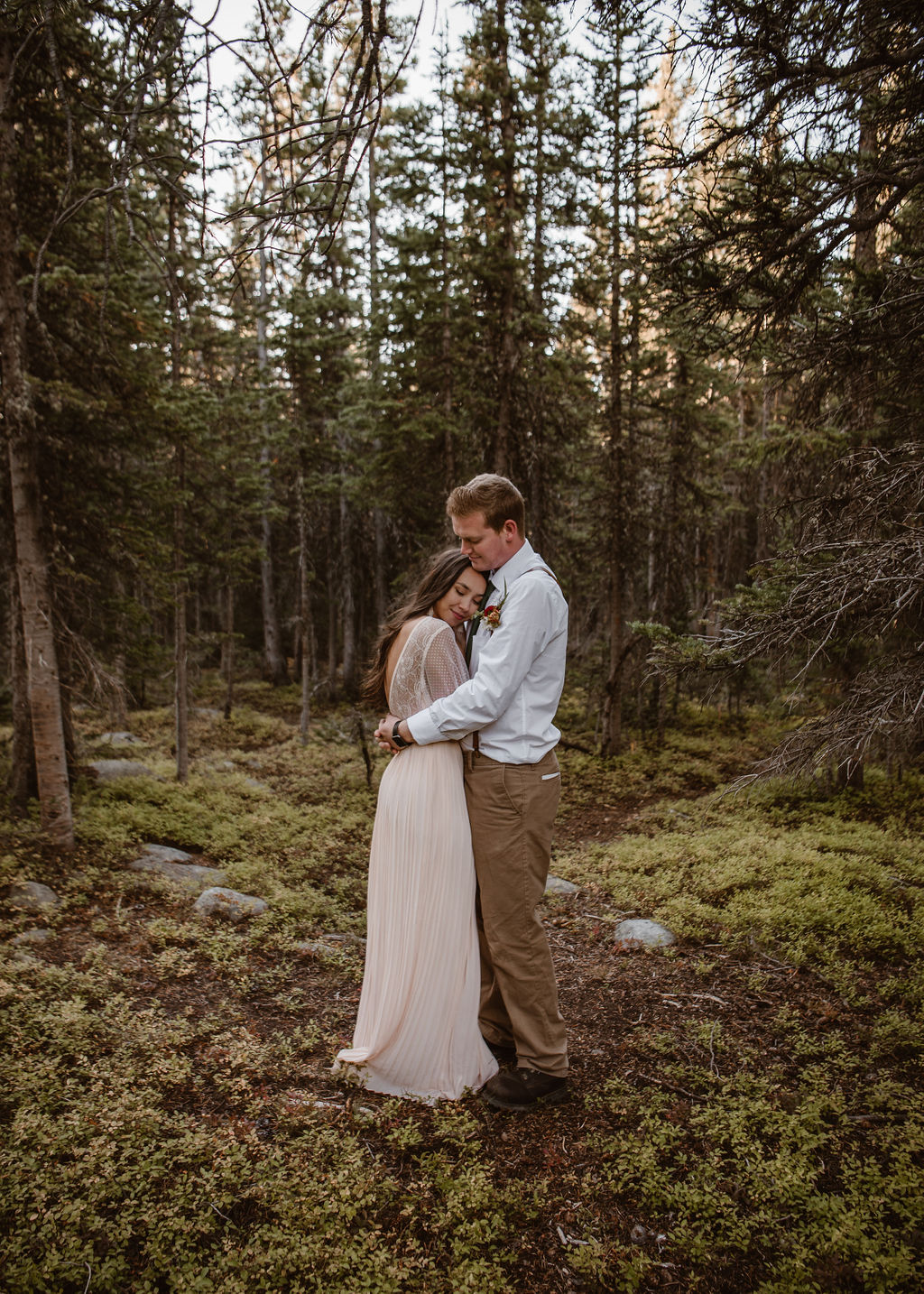 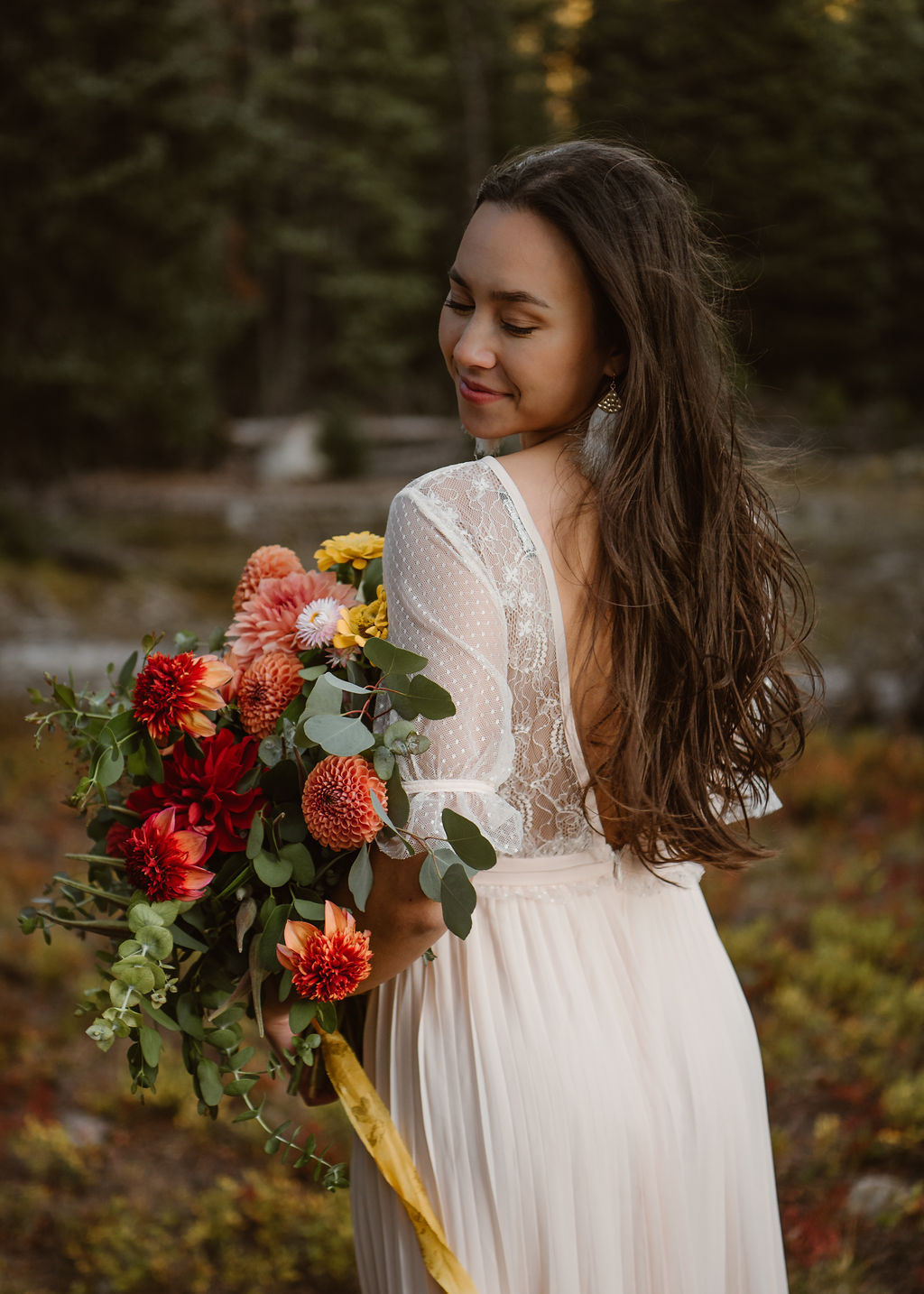 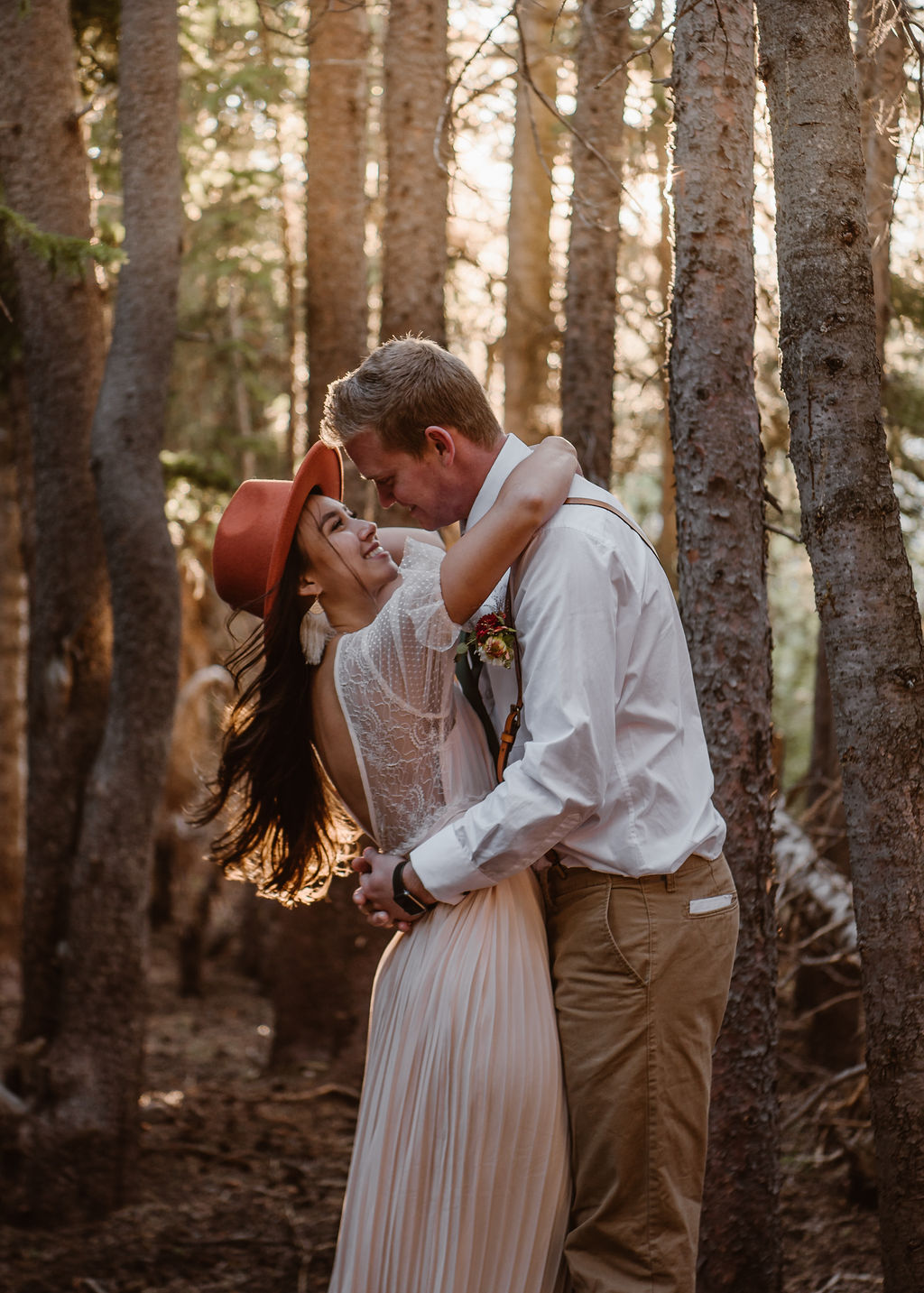 Planning a wedding involves a lot of people- and their opinions. It can easily become overwhelming and stressful. When you decide to elope, you are cutting out many of the decisions you would have had to make with wedding planning. Guest favors, feeding everyone, large venues, valet service, and more, can all make your experience perfect and elegant but for those couples who are more about the intimate vibe, eloping is perfect for you.

Ceremonies at the top of a mountain or a tropical island typically aren’t suited for big lavish wedding. This includes those hundreds of people you probably haven’t seen in years. Now, that doesn’t mean you can’t still make a registry, those hundreds of people could still be really great gift givers! Nonetheless, you will still have the choice to have a party or reception after your elopement. That way you can celebrate with your friends and loved ones and the day of the party will be way more laid back and generally less stressful. Plus, you will have a chance to incorporate those stunning centerpieces you’ve always dreamed of!

Couples may decide to elope for many different reasons. Some are sound financial reasons like saving money to buy a house or putting your new family on solid footing. Having and elopement may save big and leave space for things you truly desire to be at your wedding such as, flowers (of course!), that wedding cake you’ve always dreamed of, or a charming charcuterie board you only have to share with your loved one. Some couples just like the idea of running away to a far destination to say their vows. 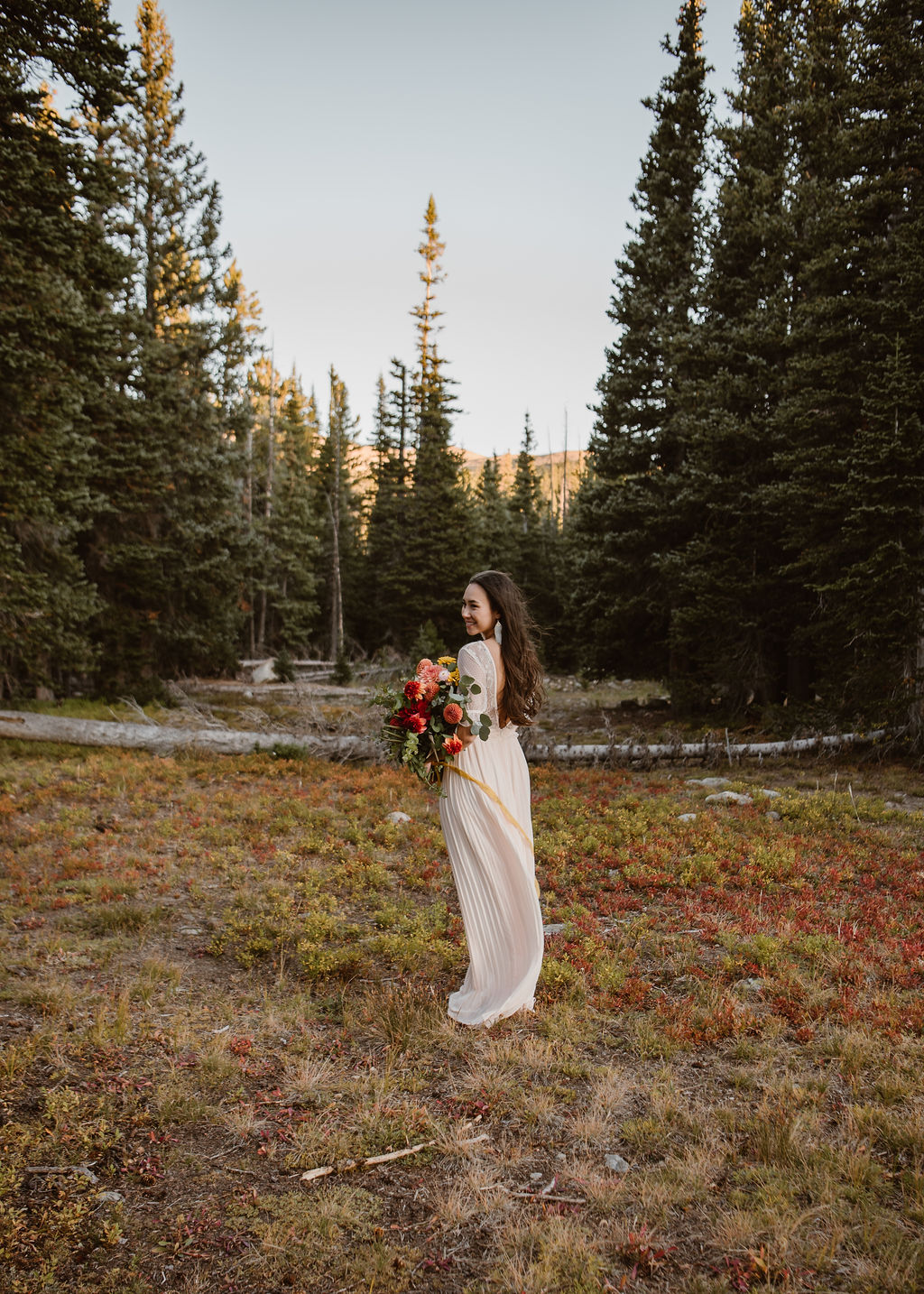 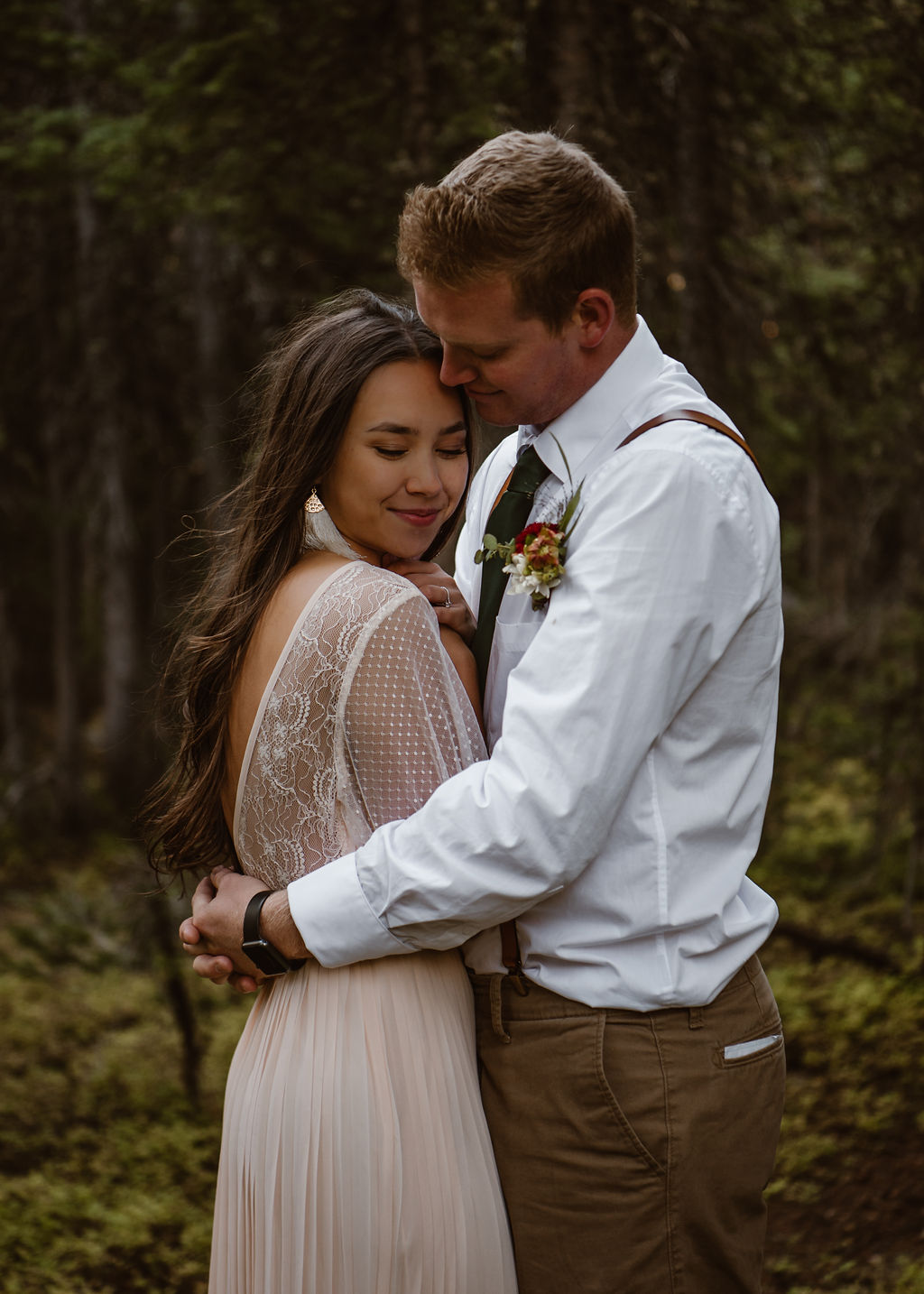 If you are an adventurous couple making the trek to a mountaintop to say your vows or if you are planning on doing a lot of exploring on your wedding day to take lots of photos, a tighter bouquet can aid in the process of a smoother day. Lush, wild, open bouquets are absolutely amazing and can aid in making your day awe-inspiring, but take note of how much you will be traveling and what your bouquet can withstand. Flower crowns are excellent for elopements! You can wear it during your whole trek, as well as boutonnieres. Choosing more sturdy flowers is always a good idea for your elopement flowers so they can endure whatever is thrown at them during the experience. We love adding foraged materials to your bouquet! Everything we forage locally will match the Colorado mountain style elopement environment. You will want to chose your florals based on the season as well as the scenery and climate of your elopement. 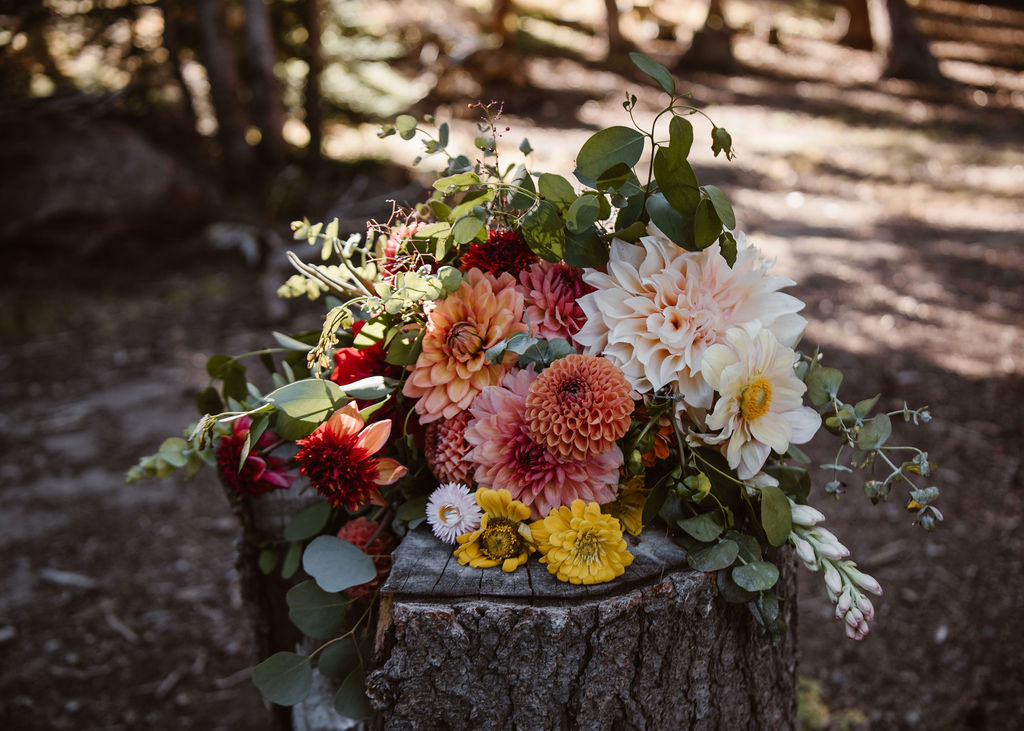 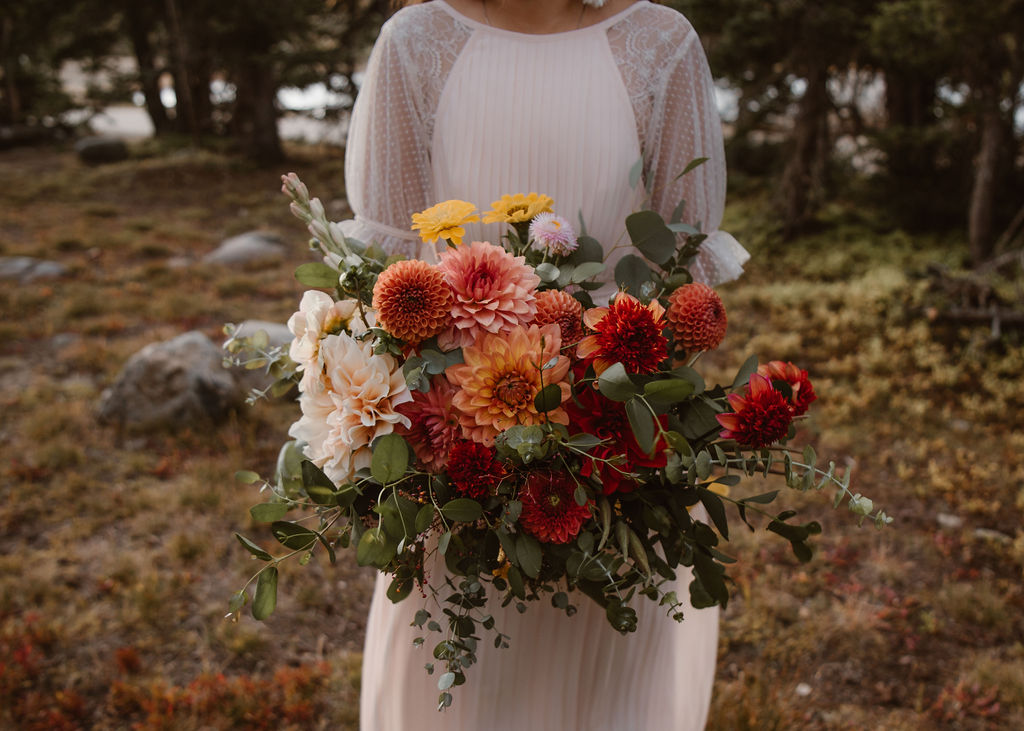 Tips for Your Elopement

Be sure to chose your location wisely. Colorado is picture perfect for a new age elopement with a mountain backdrop and wildflowers in the distance. However, you’ll want to make sure your destination is realistic and accessible for everyone involved, as well as climate and currency factors. National parks including Rocky Mountain are an absolutely stunning location to say “I do” however, some of these parks require specific passes and licenses. Most wedding planners and professional photographers will know the local laws and documentation needed for these destination elopements. Hiring a professional photographer/ videographer is a great idea so that the adventure can be captured beautifully to treasure the day forever and be able to share the moments with everyone back home. 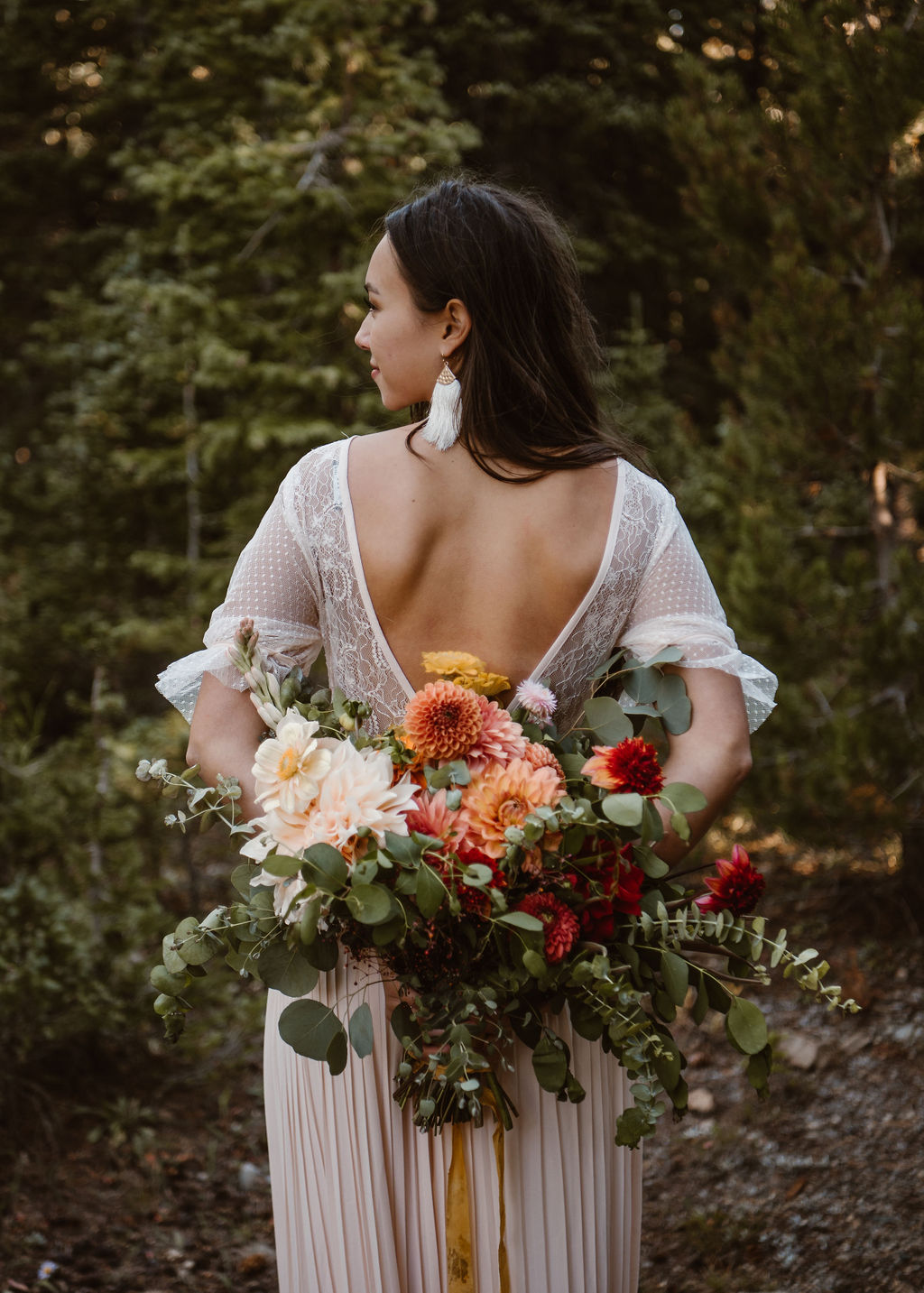 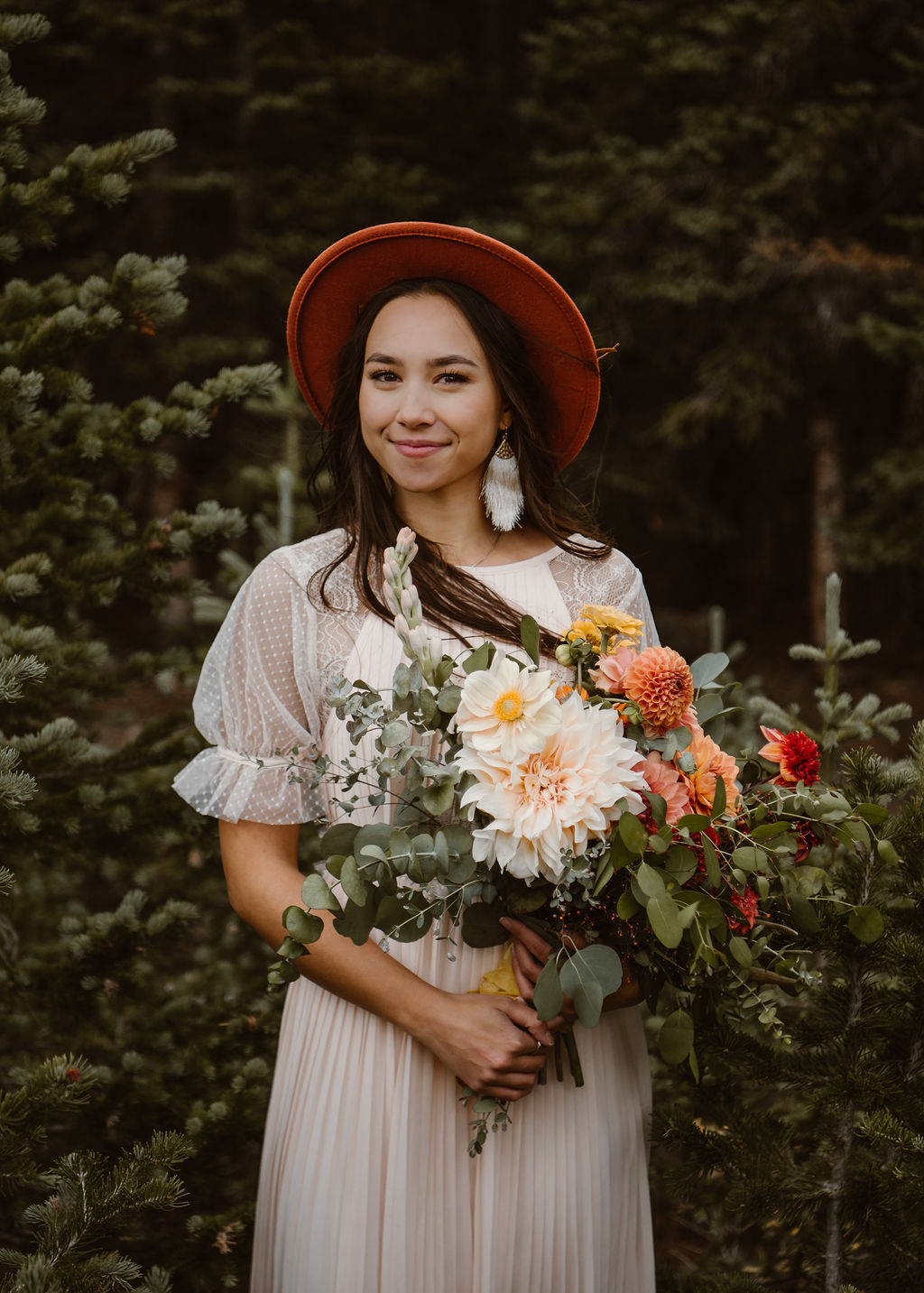 In the end, the choice is up to you and yours whether you want to elope or not and ultimately, there are no rules or guidelines you have to follow for your wedding or elopement. We believe the most important thing is to honor each other as a couple and do what feels right to you!